It's All So Simple

The New York Daily News reports CW11 in New York City is going back to being identified by its call letters, WPIX. Of course, the call letters were always there, but the marketing geniuses tried to solidify the station's identity with a couple little-watched networks-- the CW, and before that, the WB.

It's all so simple. The "WPIX" brand carries so much history in New York. They were fools to tinker with the image. It doesn't mean the brand can't be tweaked and freshened up, but if you have a strong heritage, don't fool with it. 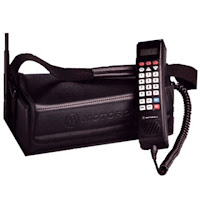 I didn't realize this until I read it in Vince Sweeney's blog, but the cellular phone has turned 25 years old. It reminds me of a story, and it happened exactly 14 years ago.

I was in Erie to cover the Ridge for Governor campaign. On election night, we were set up in the ballroom of the Avalon Hotel in beautiful downtown Erie. Our engineers hooked up a gizmo that allowed me to hear the audio of the television station back in Scranton. I needed something like that so I could hear the anchors toss to me at the Avalon. The centerpiece of the system was a cellular bag phone. It worked great. I did a live report in the 6:00 PM news, then went out to dinner with the photographer and satellite truck operator.

When we returned to the ballroom around 8:30, we discovered we never bothered to disconnect the cell phone and terminate the call to Scranton. We had just made a nearly three hour long cell phone call, across the state of Pennsylvania. Remember, this was 1994, and cell phone minutes weren't cheap.

Of course, I got called into the news director's office when the sky high cell phone bill came in, and I did the honorable thing. I threw the photographer under the bus, and blamed it all on him.