We'll begin with a little "inside broadcasting" information. If you hear your local radio disc jockey or talk show host say "It's pet peeve day," you can rest assured that person is out of ideas.

The same goes for writers. 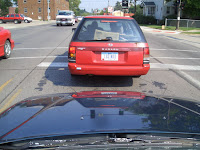 It seems tailgating is becoming more prevalent, and I don't mean firing up the grill outside the football stadium. You have to leave some room between your car and the one directly ahead of you. It's not only annoying. It's dangerous. If you're in such a rush to get to work, set your alarm to wake you up five minutes sooner. Eat your Pop Tarts raw rather than waiting for them to come out of the toaster. Just lather and rinse in the shower instead of lathering, rinsing, and repeating. Stay off my tail. It's not going to make me go any faster.

The other pet peeve involves blaming the media for all your problems. Some of the Wall Street geniuses were testifying before congress the other day. A couple had the brass to say aggressive reporting is making the problem worse. Hello! Obviously, you couldn't police yourselves. Government isn't interested in making you behave. Someone has to keep an eye on you, and that's the media.

The Wall Street suits who watched their companies go bankrupt are not alone. We hear it all the time.

I ran up big deficits while running government, but I managed to take care of my friends. It's the media's fault.

I either perjured myself, or took money that didn't belong to me. It's the media's fault.

Crime in the city? It's the media's fault for reporting the nightly shooting.

Taking big bucks and doing nothing while businesses close or move out of town? Those darn reporters.

I sincerely hope pet peeve days are few and far between.

One more thing... I was passing a bank on the way home from a leaf peeping expedition yesterday. There's a new sign in front of this institution. It says "Safe. Sound. Secure." Did you ever think you'd see the day when a bank uses "we're not going bankrupt" to market itself? We live in sad times.
AT 12:01 AM