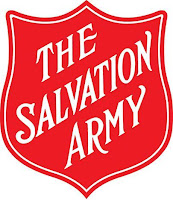 I've always had a soft spot for the Salvation Army. When I was a kid, on pre Christmas shopping trips with my mom, she always made sure I had a few coins to toss into the red kettle. It's important to remember the less fortunate. That's why last week's crime in West Pittston was particularly disgusting. Someone broke onto a Salvation Army building on Luzerne Avenue and stole $2,000 from a safe. The money came from the red kettle collection. A Salvation Army volunteer told us the loss of the money really hurts, and it might force the organization to cut back on services. Absolutely nauseating.

It will be interesting to see who did it. Is it someone who really needs the money? Is it a drug addict, looking for cash to feed a habit? Is it just a case of greed.

Stealing from a charity reminds me of the case of Jessica Hardy, the former Make-a-Wish head who stole money meant for children with life threatening illnesses. While she was robbing them blind, the local Make-a-Wish board kept giving Hardy raises. It was a huge case of theft, compounded by incompetence. A web search shows Ms Hardy spent the holiday at the prison at Cambridge Springs in Crawford County, the northwest part of the state. The state's web site describes Cambridge Springs as "a minimum-security facility for women, the majority of whom are nearing their release from prison."

I truly believe in second chances, but dealing with people who steal from those in need make it really difficult.
AT 12:01 AM