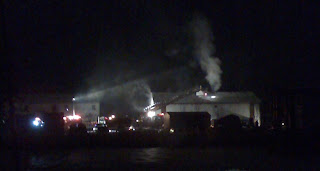 It really wasn't a good week. Two days, two fires at family businesses. Monday, it was a fire at a restaurant in Ashland. Yesterday, an excavation and septic system business near Lewisburg burned. Above is a pre-dawn camera phone shot of the fire.

Like Monday, I did ask for an interview, and the owner's girlfriend agreed to talk about what happened. It was a sad story, but the owner managed to save some of his vehicles, equipment, and computers. There's great potential to rebuild, and I hope it happens.

This is one of those weeks that causes a lot of worry. After doing this for nearly thirty years, you notice spikes in fires at a couple different times of year. One is when really hot weather arrives. People have a tendency to run big air conditioners and fans off extension cords bought at the 99 cent store. It's a recipe for disaster.

We're due for a very cold snap, and that's another prime fire season. Single digit, and colder, temperatures put a strain on electrical and heating systems. Bad things happen.

Although it's been said many times, many ways, please be careful this week. Don't forget to check on the elderly and pets. Stay warm. Be safe.
AT 12:01 AM