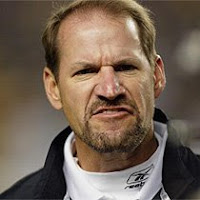 Any time there's a head coaching vacancy in the National Football League, one name consistently and unfailingly surfaces-- Bill Cowher.

You can have him.

Cowher used to coach "my" team, the Pittsburgh Steelers. Let's look at the record. Yes, his win/lose percentage is excellent, but he lost a lot of big playoff games along the way, and it took Cowher 14 years to win a Super Bowl. This is also the guy who thought Kordell Stewart was the answer to the Steelers' problems.

Bill Cowher is a good coach, probably a tad above average. He's no genius.

I will say that Cowher does a very good job on that generally unwatchable CBS NFL pre game show.

Speaking of coaches and broadcasting, former coach Dan Reeves does the "color" on some national radio broadcasts. I caught his act Saturday night, as I drove to work. If Reeves has knowledge, it didn't come across on the radio. His delivery is awful. The same can be said for Denny Green, who did the radio analysis on the Sunday afternoon Dolphins/Ravens game. Bad voice. A bad listen. There has to be better talent out there.

And while I'm ranting... something positive. I've never been a big Mike Shanahan fan, but he displayed a lot of class during his news conference after being fired as head coach of the Denver Broncos. Shanahan politely and professionally answered every question, even the dumb ones.
AT 12:01 AM