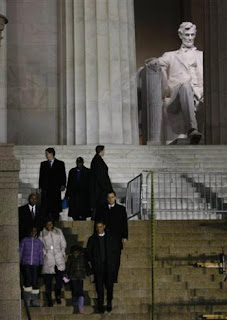 There were two stories on Newswatch 16 Sunday Morning yesterday that I really liked. One was President-Elect Barack Obama taking his wife and daughters to visit the Lincoln Memorial in Washington, D.C. Whether or not you agree with his politics, it was nice to see a smiling young family taking in one of our national treasures. It reminded me, a little, of my father taking me around Harrisburg and the State Capitol as a kid when he was there conducting business with PENNDOT. The moments were special back then. The moments looked special for the Obamas. 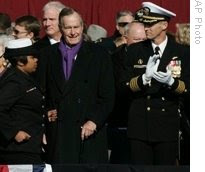 Then, there was the Bush family, including the 41st and 43rd presidents of the United States. They gathered in Norfolk, VA for the commissioning of the U.S.S. George H.W. Bush. I'll leave it up to you to decide whether or not its deserved, but George H.W. Bush and George W. Bush have been kicked around a lot during their time. The first Bush failed to win re-election in 1992 because a lot of people felt he was simply out of touch. His son led us into a war the majority of Americans feel is a mistake. Putting all that aside, you can see the pride in the Bush family. 41-- proud to be honored by his country. 43-- proud of his father.