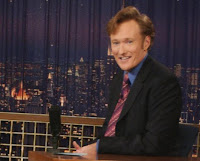 I wouldn't watch Conan O'Brien if my television only received one channel, and he was the only program on.

However, I happened to be up, and at work, early Saturday morning when O'Brien did his last "Late Night" on NBC. He's moving to the "Tonight" show June 1st. Curiosity got the better of me, and I spent several minutes watching the tail end of the last O'Brien "Late Night" after 16 years.

The first part of O'Brien's farewell to "Late Night" speech was actually pretty good. He thanked his predecessor, David Letterman, current "Tonight" show host Jay Leno, and all the NBC executives who stuck by his side after those first awful shows.

The rest of the speech was the biggest piece of self indulgent tripe I've heard in a very long time. I still don't think O'Brien is very good, and he's only moving one hour. He's not retiring, and he's not receiving a lifetime achievement award. O'Brien's speech sounded like an acceptance address for the broadcasting hall of fame. It was too long.

I never cared for Leno's style, but he's still infinitely better than O'Brien. My biggest O'Brien beef was he always tried to be funnier than his guests. He should spend several hours watching Johnny Carson DVD's. The man knew how to bring out the best in his guests, not upstage them.

The people at CBS and NBC have to be thrilled with this move.
AT 4:15 AM