They Didn't Buy It 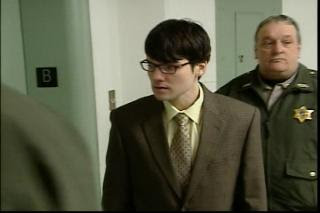 Harlow Cuadra was found guilty of first degree murder, yesterday, in Luzerne County Court. He'd been charged in the January 2007 stabbing and slashing of Bryan Kocis in Dallas Township.

I was in the court for part of Cuadra's testimony. I saw him on numerous trips to and from the courtroom. Cuadra's attorneys did their best to make him look like a nice, little boy. He wore glasses. His clothes were just a little too large. It was clearly an effort to make the accused killer look like a mild youth-- someone who couldn't possibly have committed those horrible acts.

Then, there was the testimony. It didn't seem genuine to me. It seemed fake. It seemed like a lie, an act. Apparently, the jury agreed.

Cuadra blamed the actual slashing on Joseph Kerekes, the man who pleaded guilty to second degree murder back in January. It carries a life in prison sentence. While Kerekes might have been the one wielding the knife that night two years ago, Cuadra was a willing accomplice, and that makes him just as guilty. The jury followed the law, even though it's human nature to place less blame on the person who didn't actually commit the murder.

Here's what put me over the top. Kerekes AND Cuadra bought a big knife and a can of lighter fluid before their trip to Dallas Township. How could Cuadra have NOT known Kocis was going to be harmed? Cuadra told a false story to the jury. He got caught.

While sitting in judgment of another is never pleasant, Cuadra made things a little easier for the jury by lying to their faces.
AT 12:01 AM