I don't get star struck. The reason? Most celebrities I've met have been idiots. The worst-- Don Imus and Terry Bradshaw. Debbie Reynolds was at the complete opposite end of the spectrum. She couldn't have been nicer. Peter Criss, formerly of Kiss, was kind to me, as were members of the band Foghat. I researched Criss before my interview. I was never a Kiss fan. Sorry. He seemed impressed that I had done my home work and was able to ask relevant questions. Hey, only doing my job. I rode in an elevator, in Morgantown, WV with Brent Musberger. He seemed like a delightful chap. Hal Linden, of "Barney Miller," came to Wilkes-Barre once to campaign for senate candidate Bob Edgar. "Barney Miller" is one of my all time favorite shows. I was working radio at the time, and it was a forgettable interview. All politics. All boring. In fact, most of my brushes with celebrity have been in the "forgettable" category.

I will cop to getting a little star struck at the oddest times. The latest was Monday morning in Hanover Township. Sallie Mae announced it was bringing 600 jobs to Luzerne County. Douglas Kiker, Jr. was part of the public relations team. 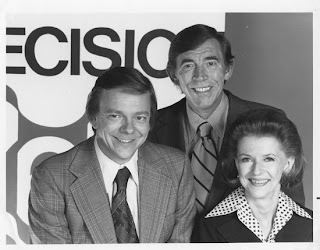 Douglas Kiker, Sr. is the gentleman standing, in the middle, in the photo above. He was an author, newspaper reporter, and NBC News correspondent for a long time. He passed away in 1991 at the age of 61. The name rang a bell immediately, and I asked Junior if he was related to the NBC News correspondent. He replied "That was my father," and a slight smile crossed his face. He seemed pleased someone remembered. I'm not faulting my colleagues, because many of them are considerably younger than I, but I was the only one who recognized the name. Yes, the son does resemble the father, and it was a kick meeting him.

The other case of "Starstruck: The Offspring Edition" took place many years ago in Towanda. I was covering a murder trial. The stations from Elmira were there. One of the reporters from Elmira was Cousin Brucie's daughter. That's her, at two years old, with her dad and the rest of the family. The photo is from Cousin Brucie's book, called "My Life in Rock n Roll Radio." 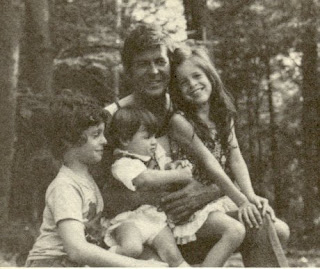 Remember, I started in radio. Cousin Brucie worked at WABC and WNBC in New York. He now does a show on Sirius/XM satellite radio. Cousin Brucie is part of radio royalty, and I was talking with the prince's daughter! She was impressed that I read her dad's book, and she reminded me that her picture was in the middle-- the one you see above.

Meri Morrow has to be around 40 now. I understand she left for the west coast many years ago. A Google search failed to turn up any recent information. I do remember one tid bit from that day in Towanda. Meri Morrow's photographer told me Cousin Brucie got his daughter a set of implants for her birthday.

As I said earlier, I will admit to getting star struck at the oddest times.
AT 12:01 AM