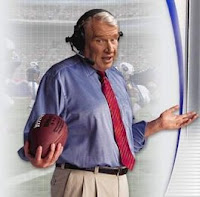 I got sidetracked with other issues last week, so today, I have to note a couple changes...

John Madden is retiring as an NFL broadcaster. He had that "everyman" appeal, and he knew how to break down a football game so you could understand it. You can't teach that. Add enthusiasm and a big personality, and you have the most famous color commentator of all time, in any sport. 30 years at the top says a lot. Even if you're not a Madden fan, you have to respect the longevity.

When you heard Madden and Pat Summerall, you knew it was a big game. By the way, you have to note Summerall's accomplishments here. I don't think Madden would have been as good if he didn't have Summerall by his side. Pat knew how to set up Madden, get out of the way, then drag him back to the basics of broadcasting a football game.

CBS paired Madden and Vin Scully at the beginning. It didn't work.

Here's how I knew Madden was really good. When Madden went to ABC and was teamed with Al Michaels, some predicted disaster. Michaels allegedly has a big ego. For sure, we know he likes to talk. He's the anti-Summerall in many ways. However, Madden and Michaels adapted, and they formed a very good team for ABC, then NBC. Madden was taken out of his Summerall comfort zone, and he was still an easy listen.

It's nice to leave under your own terms. Madden is doing that, and it appears to be a good move.

Merle Harmon died Wednesday. Harmon was never in the upper tier of sports broadcasters, but he was darn solid. Merle Harmon did play by play for the Texas Rangers, Minnesota Twins, and Milwaukee Brewers. He also broadcast college football and the NFL for ABC and NBC. Merle Hermon was 83. 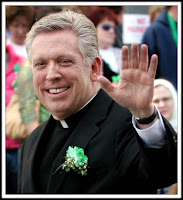 Then, there is Msgr. Joseph Quinn, who is leaving his church in Carbondale for Fordham University in the Bronx. For many years, Quinn was assigned to St. Peter's Cathedral in Scranton. There was always a sigh of relief when you knew you'd be interviewing Msgr. Quinn. He was good on TV-- comfortable, well spoken, very likeable. We talked after the passing of Bishop McCormick and Cardinal O'Connor. Quinn knew just the right words. He was quite an asset to the Diocese of Scranton.
AT 12:01 AM