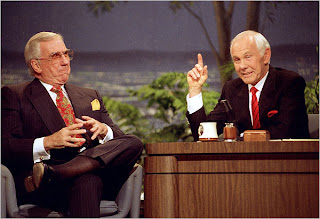 He has been called the number one second banana in broadcasting history.

Ed McMahon died yesterday. He was at Johnny Carson's side for about thirty years. McMahon knew his job was to make Carson even more funny than he was. The Aunt Blabby and Carnac characters were good because McMahon was the ultimate set up man. It can be tougher to be the straight man, than the one who gets the laughs.

Johnny Carson got all the credit, but some of that should have gone to Ed, who made it look too easy. Ed had that quality you can't teach-- people liked him.

McMahon made a lot of money during his lifetime. He also spent a lot of money, and his final years were so sad-- especially that Larry King appearance when McMahon was on the verge of being thrown out of his home.

Ed McMahon was more than the "Tonight" show. There were the commercials, his work with the Muscular Dystrophy Association, "Concentration," "Star Search" and all those bloopers shows. There were distinguished years in the military before and after broadcasting called.

I know it sounds strange, but I enjoyed reading all the obituaries yesterday and today. It's great fun for someone who enjoys the history of the biz. Comedian Tom Dreesen, who appeared on "Tonight" 61 times said Ed was the greeter. Carson was like most hosts. He didn't like to talk with guests before the show, fearing the "on air" segments would lose their spontaneity. Ed was the guy who encouraged young comedians, the guy who gave advice, their first friend on the show.

I'll always remember that hearty laugh and "You are correct, sir."