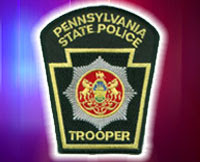 We in the news media often have a difficult relationship with law enforcement. They keep us back from crime scenes. Information never flows as quickly and freely as we would like. There is a long list of similar complaints.

But, at least I know I'm going home at the end of the day. Police officers don't have that luxury. A Pennsylvania State Trooper never made it home Sunday night. He was trying to stop a man who kidnapped his son at gunpoint.

My deepest sympathy to the family of Trooper Joshua Miller, especially his wife and three children. Also, my condolences to Trooper Miller's State Police family.

We can't forget about Trooper Robert Lombardo, who was wounded Sunday night.