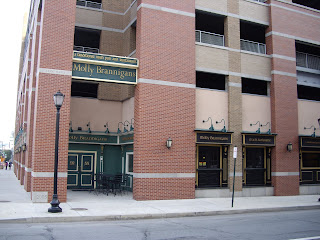 I usually formulate blogs in my head, giving them some thought before I sit down at a keyboard. I've been going back and forth over the Molly Brannigans thing for a couple of weeks. Here's what I was thinking before the restaurant closed Sunday.
Molly Brannigans occupied the corner of Lackawanna and Adams Avenue, on the first floor of a Scranton Parking Authority garage. It's been struggling for months. The Parking Authority gave management a break on the rent.
Let's go back about 20 years. Lackawanna County Stadium was new. The plan was to have concerts there when the stadium wasn't being used by the Red Barons. It was seen as a great way to attract people to the area, and help pay the debt service for the stadium.
Then, the Riverside School District smelled easy cash coming from the Moosic ballpark. It slapped an amusement tax on the tickets. Concert promoter Thom Greco said that couldn't and wouldn't work. Greco claimed promoters work on small margins. An amusement tax would put the operation in the red, and no one can afford to be there. Greco proposed giving the school district some money, but not as much as it would have collected by the amusement tax. In an interview with me, while I was working down the street, Greco said "A little bit of something is better than a lot of nothing."
Okay. Now that we've established that, let's move back to present time. In giving Molly Brannigans a break, the Parking Authority reasoned that a little bit of something is better than a lot of nothing. Reduced rent would still give the authority some money, while the old rent would have forced the restaurant to close. The Parking Authority would have received nothing for the empty space.
I can live with that.
On the other hand...
If you give a break to one business, it's only fair to do it for the rest. Once you open that door and walk through, there is no going back. I suspect it's the reason the Scranton Parking Authority tried to keep the revised rent agreement out of the newspaper. The SPA didn't want its other tenants running up with their hands out. A lot of people were up in arms over the Parking Authority/Molly Brannigans deal, and I can understand their anger. There are a lot of businesses who have invested in the city. They've been here in good times and bad. Where's their deal? What about the people who park in the SPA's lots and garages, who have to pay some steep rates? Yes, it stinks, but no one said life is fair.
So, if that isn't enough, Molly Brannigans closed Sunday night. A company executive was quoted in the newspaper as saying the restaurant simply wasn't making money here. Why?
I've never been there, but after talking with friends, the consensus is there's too much competition. Plus, the fare was average at best, and a little too expensive for the market.
I don't want to kick someone while they're down, and I feel sorry for the people who've lost their jobs, but those faux Irish pub places never worked for me. It didn't have an authentic feel.
Also, a person with the Parking Authority was quoted as saying he's already heard from businesses interested in that space. Let's hope they can pay the rent-- all the rent.
AT 12:01 AM