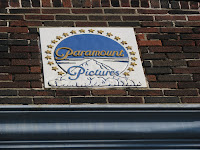 Okay. I promise to give the Paramount building mystery a rest for a while... after today.

To bring you up to speed, I could never figure out why there was a big Paramount Pictures tile, apparently original, above a building on State Street in Wilkes-Barre.

A former local movie theater manager has come to the rescue. He believes Paramount had an accounting department in that building. It goes back to the time when every little town in the area had a movie theater, and sometimes more than one.

There are others involved in trying to unravel the mystery, so bear with me if there's an update or two in the weeks to come.
AT 12:01 AM