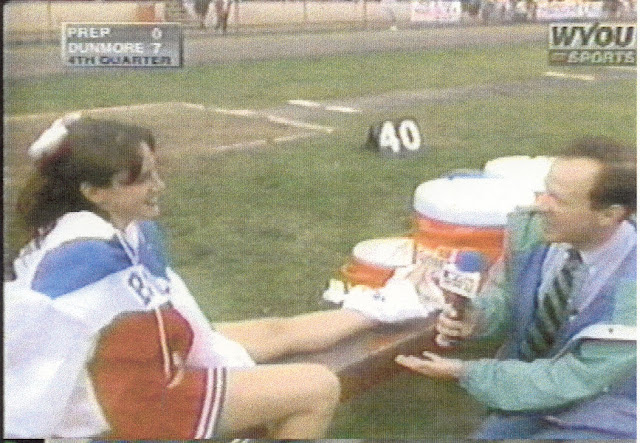 One of the great joys of my professional career was being associated with WYOU's High School Game of the Week in the early and mid 90's.

CBS didn't have college football at the time.  We needed Saturday afternoon programming, and management wanted to show the station was on the right track.  WYOU did a Saturday afternoon high school game for, I'm guessing, about four years.  I had the pleasure of being sideline reporter for a lot of that time.

Of course, being a sideline reporter involved halftime and post-game player and coach interviews.  A big part of the job involved what we call "color."  In other words, have a little fun.

The above photo (Sorry for the bad screen cap print out.  I didn't do it.) was taken on October 14th of 1995.  It was at the Dunmore/Scranton Prep game.  I was prowling the sideline, looking for things that were interesting, when I spied a cheerleader on the bench.  There was an ice pack on her propped up ankle.  She hurt herself during a routine.    The people in the WYOU production truck, along with play-by-play announcer John Nugent, thought it was cute.  Cheerleaders can get hurt, too.  I went back to her a couple times during the game for injury updates.  She was a good kid and went along with the whole thing, even though I could tell she was a wee bit embarrassed.  Sorry.  I don't recall her name.  It was a long, long time ago.

I'm very happy with the direction time has taken me, and as I watch the WNEP staff do the Super 16 Sports Final every Friday night, I think of my stint on the sidelines.  I also wonder what happened to the cheerleader.  She has to be married with children by now, and I hope her ankle is holding up.
AT 12:01 AM