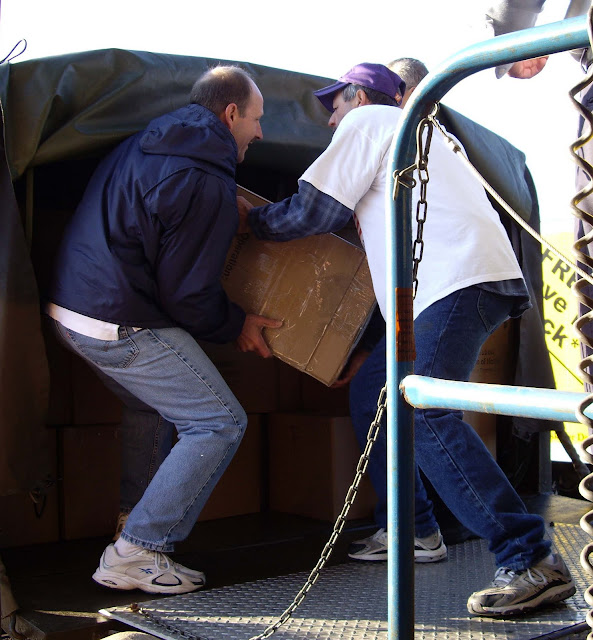 It's the third straight year I've done the story, and in fact, I lobbied heavily for the assignment yesterday.

It's called Operation Touch of Home, and I took the above photo yesterday morning as a truck was being unloaded at the Brodheadsville Post Office.

Volunteers in Monroe County collect personal care items and other objects of comfort for U.S. soldiers and Marines serving in Iraq and Afghanistan.  They have to ship early to make sure the packages arrive by Christmas.  Much of the collection was done over the weekend, as we showed you on Newswatch 16.  The packing was done Sunday night and early Monday morning.

While the locals receive the packages, we hear they share the items with others in the units, so what happens here touches hundreds, maybe thousands.  There are the "thank you" letters from overseas to prove it.

I don't remember where I saw it, but someone recently said what we see as necessities here are viewed as a luxuries in Iraq and Afghanistan.  It's tough to be away from home during the holidays.  It's even tougher when you're fighting a war.  I spoke with people who were there.  They really appreciate the "touch of home."

Operation Touch of Home is more than toothpaste, lip balm, baby wipes and cookies.  It shows there are people, a lot of them, who care.  The items being sent out don't cost much, but the value is priceless.  Apologies for sounding like a credit card commercial.