I was going through a "business year in review" piece the other day, looking back at the horrible predictions as we entered 2009.

While it was a rough year, the only major retailer to exit the stage was Circuit City.  That doesn't mean there weren't struggles, but that string of bankruptcies and going out of business sales never materialized.

Saturn is a goner.  GM is dropping some lines.  Kodak is dumping Kodachrome, which didn't sell anyway.

There is a long way to go before we're out of this economic mess.

Some folks in Washington appear optimistic.  There are still a ton of "doom and gloomers" out there.  Like most things, the truth lies somewhere in the middle. 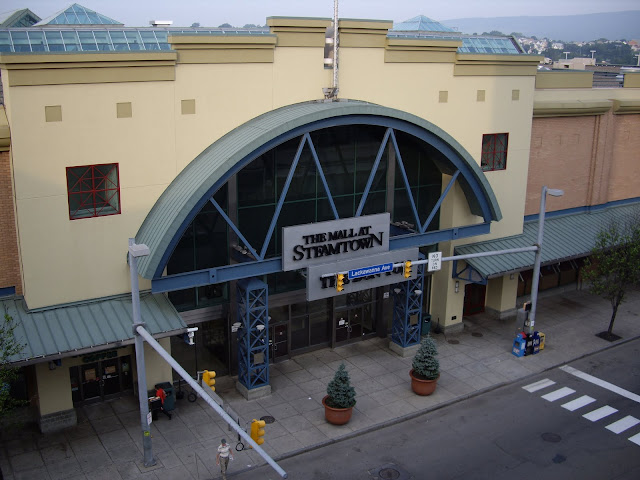 Speaking of "in the middle," nearly HALF of the Mall at Steamtown is either vacant or is occupied by a small business with a temporary lease.  HALF!

You really have to wonder what's going on here.  The two anchors remain-- Bon Ton and Boscov's.  I've read Boscov's isn't totally out of the woods, even though the company has emerged from Chapter 11 bankruptcy protection.

On top of that, the movie theaters aren't scheduled to re-open for another month.  A fire next door kept the cineplex closed for nearly six months.

I realize that in a bad economy, there's only so much you can do.  Competition is fierce.  I get the feeling that if the mall isn't at the "no turning back" point, it has to be close.  A stroll around the mall Monday afternoon showed a fair number of people, and that was a bit surprising.  Boscov's seems filled with "As Seen on TV" products and dollar store items.  The biggest crowd was at the Comcast office, where people were paying their cable bills.
AT 12:01 AM