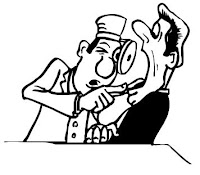 I got the blame for the country's health care problem yesterday.

Thank you for the promotion.  I didn't know I was so powerful.

My thrust toward greatness happened shortly before noon.  Photographer Steve Smallwood was inside the truck, editing our piece on reaction to the health care bill, for Newswatch 16 at Noon.  I was outside, collecting my thoughts and doing what I do best-- standing around.

A gentleman approached, and asked what we were up to.  I explained.  He replied, and he was nice about it,  that I was one of the people responsible for the mess in Washington, because liberal media people, like me, put Obama in office.

I've heard it before, and I've learned to take it all in stride.

Respectfully, it's none of your business who I voted for.  I have no business knowing your preferences.

I will say this:  It is grossly unfair to paint all media people with the same broad brush.  Some are liberal.  Some are conservative.  Most of the people I've encountered in 30 years in the biz are somewhere in the middle.  The good ones, and I trust I'm in that group, keep our political beliefs out of our reporting.  If that isn't enough, producers, anchors, and managers look at our work before it reaches your eyes and ears.  Bias would get red flagged, and in a hurry.