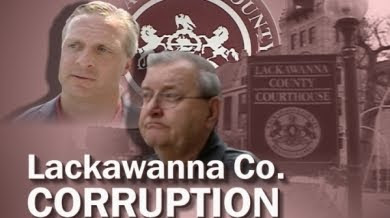 I've known Bob Cordaro since 1988, the year he ran for congress against Joe McDade.   He appeared on a radio talk show I was hosting on a temporary basis.  We talked, on the air, for an hour.  He answered all the questions, and it was apparent that Bob Cordaro is a bright guy.

Cordaro owned a few radio stations.  Our paths crossed several times over the years due to "the business."  Nothing major.  We talked shop.  We exchanged pleasantries.  He was always willing to help with stories when he was county commissioner.  We got along.  Cordaro rode into office as a reformer.  That struck a positive chord with a lot of people.

Tuesday's indictment brought sadness and anger.  While Cordaro and Munchak are innocent until proven guilty, you can't hide the fact that the feds have a wildly successful conviction/guilty plea batting average.  The feds say there was no reform-- just years of thievery.  Organized crime would stand in awe of what Cordaro and Munchak allegedly did.  It's the "abuse of the public trust" thing.  Citizens deserve better.

I know Ernie Preate, but not as well as Cordaro.  I covered Preate as Lackawanna County District attorney and later Pennsylvania Attorney General.  His courtroom performances were amazing, the best prosecutor I ever saw.  No one else is even close.  Preate went to jail for mail fraud.  I once ran in to him at the Scranton federal building, before he did his jail time.  Preate didn't look good.  It was likely the loss of status, loss of money, the shame, the stress...  I walked over and said "I hope everything works out for you."  He quietly said "thank you" and we went our separate ways.  Preate went to prison and paid his debt to society.  His law license was returned, and he's now defending people rather than prosecuting them.  I'm not sure I would have voted for the return of the law license.  The state's highest law enforcement officer should be held to a higher standard.  On the other hand, the return of the license allowed Preate to become a productive member of the community again.  We could debate this for days.

Now, back to Cordaro...  I hope everything "works out" for him.

"I hope everything works out for you" has turned out to be a wonderful sentence.

Things "worked out" for Ernie Preate.