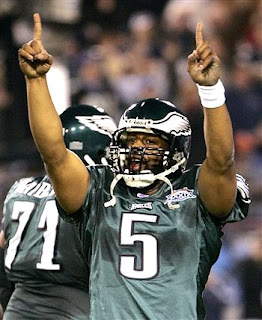 In baseball, they call it warning track power-- a player who can hit it far, but not over the fence, never a home run.

Former Philadelphia Eagles quarterback Donovan McNabb had the football equivalent of warning track power.  He could win you some games.  He was good, but not good enough.  His playoff record was 9-7.

The Eagles, smartly, finally decided McNabb didn't have a Super Bowl championship in him.  He was dealt to the Washington Redskins, for a couple draft picks, Sunday night.

It's a trade that helps both teams.  The Eagles can use the draft picks.  McNabb is better than Jason Campbell, last year's starter for Washington.

The NFC East is always an interesting division, and it will be even more so this year.
AT 12:00 AM