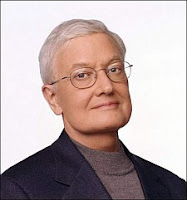 I've always liked Roger Ebert.  He and Gene Siskel made movie reviews interesting, even if you weren't a movie buff.  Ebert has the right touch.  He can relate to both the casual and serious film fans.

Disney is cancelling Ebert's old show, "At the Movies" after 24 years.  it goes off the air in August.

Roger Ebert has had a series of horrific health problems over the last few years.  He can no longer speak or eat.  A computer does his talking.  Nurtition comes from a tube.

I was thrilled to read that Ebert will produce another movie review show for syndication, possibly being available later this year.  While he won't appear on camera, you will hear his computer synthesized voice offering occasional comments.  Ebert feels there's still a place for a serious film show on television, and I agree.

Do yourself a favor.  Go to Ebert's web site.  It's more than movie reviews.  His essays are outstanding.  The man can write.

His perseverence after all those health problems is nothing short of amazing.
AT 12:01 AM