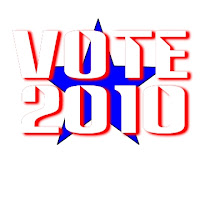 It's been one week since the election, and a few issues are still gnawing at me.

The candidates for state senate in the 22nd district are complaining about a nasty and misleading robo call that went out just before last week's election.  Boo hoo!  In a way, they're getting a taste of their own medicine.  Those calls are a nuisance and unnecessary.  If they want to start on reforming Harrisburg, get political calls added to the "do not call" list.  While I do not advocate someone calling your home to give you a list of lies, this could be a good thing.  Now, maybe candidates will realize how much we all hate those calls.

Pat Toomey began running ads almost before the last votes were counted.   Joe Sestak was in the Wyoming Valley yesterday.   Politics usually took the summer off and kicked up again on Labor Day.  Let's face it.  Running for office is now a 24/7/365 business.

Experts, and wannabe experts are picking over the bones of the Arlen Specter campaign.  The consensus is that hard line Democrats were never comfortable with his party switch.  Just about everyone had problems with Specter's attack on Joe Sestak's Navy record.   The rise and fall of Arlen Specter will be discussed in political science classes for decades to come, and future candidates will learn from Specter's mistakes.

Some candidates have to learn there's a difference between "tough decisions" and "bad decisions."

I realize that mid term elections traditionally go against the party in power.  However, there's five months until the general election.  Anything can happen.  Those willing to hand the races to any party or candidate could be surprised.
AT 12:00 AM