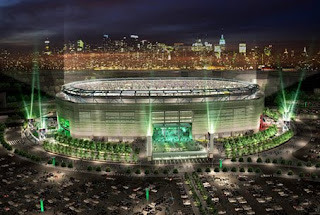 The NFL on Tuesday voted to award Super Bowl XLVIII to the New York/New Jersey metropolitan area.  The game will be played in the new Meadowlands Stadium in February of 2014.  It will be the first Super Bowl, in a cold weather city, without a dome.

First and foremost, the weather should not be a factor in a game of this magnitude.  Super Bowls are played at night.  The average night time low in New York City, for February, is 24.1 degrees.  There's also strong potential for snow and ice.  The NFL says it will employ people with shovels and plows to dig out the stadium if there's a storm.  There will be fire pits in the parking lots for fans to keep warm.  Gee, thanks Commissioner Goodell!

The other reasons-- New York is too big, too expensive, and it's a place where it's too difficult to get around.  Super Bowl week is filled with parties for the rich and famous, and fan friendly events for the average family.  Some of these events will be in the city.  Others will be in and around the Meadowlands.  It's tough traveling in the metropolitan area on an average day.  Add Super Bowl crowds, and it will be a logistical nightmare.

Security is tight.  Wait in line to be checked, in 20 degree weather.

What were they thinking? 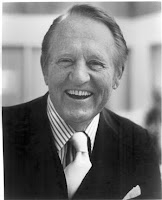 Being a mild broadcasting history geek, I have to write a few words about yesterday's passing of Art Linkletter at the age of 97.

I remember watching "House Party" after school as a youngster, and being amused, even though I didn't understand a lot of what was going on.

In an interview many years ago, Linkletter said talking wasn't his real talent.  Listening was.