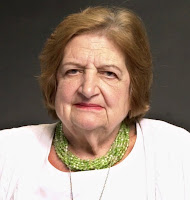 I have mixed feelings about Helen Thomas.

The 89 year old former UPI White House correspondent, and current Hearst columnist resigned this week, after saying something really dumb last week.  Thomas suggested Jews get out of Palestine, and go back to Germany and Poland.  As others have said, we know how well things worked for the Jews, in those places, in past decades.

I was never a Helen Thomas fan.  While I respect her longevity, her bias and agenda were clear.  She didn't question at White News conferences.  She disrespectfully pestered and harangued.  Helen Thomas stayed at the party too long.  She should have retired years ago.  In a Washington Post story, CBS Radio News correspondent Mark Knoller said Thomas often asked questions that embarrassed other reporters.  Writer Tucker Carlson, on Tony Kornheiser's radio show yesterday, called Thomas "a horrible person."  Her questions were "screechy and pompous."

Having said that, this is still America, and you have the right to say stupid things.  Ask Don Imus.  Those who disagreed with Helen Thomas should have stated their case, and engaged in a debate.   Advocating her professional execution-- the end of her career, as many did, was far too much.  Helen Thomas might be an idiot, but even idiots have constitutional protection.

Everyone like to leave on their own terms.  We are a country of second chances.  I'm sorry it didn't work out for Helen Thomas.  She should have known better.
AT 12:00 AM