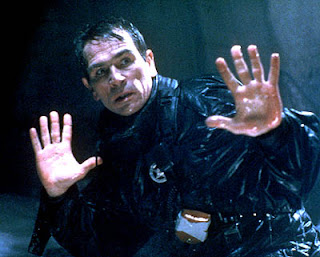 My favorite scene in "The Fugitive" is the one where Dr. Richard Kimble points a gun at U.S. Marshal Sam Gerard and says "I didn't kill my wife."  Gerard responds, "I don't care!"  He really didn't care.  Gerard's job wasn't to decide guilt or innocence, although he eventually discovered Kimble really didn't kill his wife.  Gerard's job was to simply capture a wanted man.

Caring is so subjective.

I think President Bush really cared about the victims of Hurricane Katrina.  He did a lousy job of showing it, and there were things his administration clearly could have done much, much better.

I think President Obama cares about the oil spill in the Gulf of Mexico.  Having said that, his administration could have come up with a more effective response.

I think BP cares about the gushing well, and it comes down to one simple reason.  It's costing them a lot of money.  It's always about the money.  Corporations care when big money is involved.

It's like what happens any time there's a big power outage.  The newsroom is flooded with calls from people who claim the power company doesn't care, and is taking its time restoring service.  Hello!?!?!?  The electric company doesn't make money unless your home is hooked up and that meter is spinning. A slow response is bad business.  BP isn't making money unless that gulf oil is refined into gasoline, it's in your tank, and you're burning it up to get to Starbucks for a Caramel Frappucino.  Fixing a blown out deep well is new territory, and the best minds in the world can't even figure it out.

Corporate responsibility?  Pride?  Image?  I'm sure they're factors as well, but follow the money.

Seeing those oil covered beaches and birds is sickening.

We just have to face the fact that every move these days is run through the political filter.
AT 12:00 AM