The late great Art Linkletter used to do a little two minute feature for the Mutual Broadcasting System back in the 80's.  It was called "What's Right with America."  The feature was just what the name says.  Today is my little version of "What's Right with Radio."

As I was driving around the other day, I was listening to WARM 590.  The station isn't what it used to be.  It's now satellite delivered oldies, 24 hours a day.  The music mix is really quite good, but here's what makes it work.  The format is programmed by legendary DJ Scott Shannon.  He's also the primary talent.  Shannon knows how to say what needs to be said, do it quickly, and get back to the music.
Yes, there are the annoying "American Idol" and "Dancing with the Stars" discussions, but they are wonderfully short and to the point.
Live and local is always better than canned and satellite, but if you're going to do the latter, at least do it right.  Shannon does it the way it's supposed to be.

Most of the local talent should listen to Shannon and learn.  Longer isn't necessarily better.  Be economical with your words.  When you say less, you make every word count, and it has a greater impact. 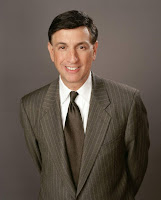 Unfortunately, I have to close with a bit of disappointing radio news.  Marv Albert is giving up Monday Night Football after eight years.  He wants to cut back on his schedule.  TNT and YES basketball telecasts keep him on the road for about half the year.  Marv turns 69 this week, so you can't blame him for wanting to slow down a little bit.
Marv's past issues are well known, so I'll spare you a further discussion.  He seems to have conquered his demons, and that's great.
Marv Albert is one of the best broadcasters of our time.
AT 12:00 AM