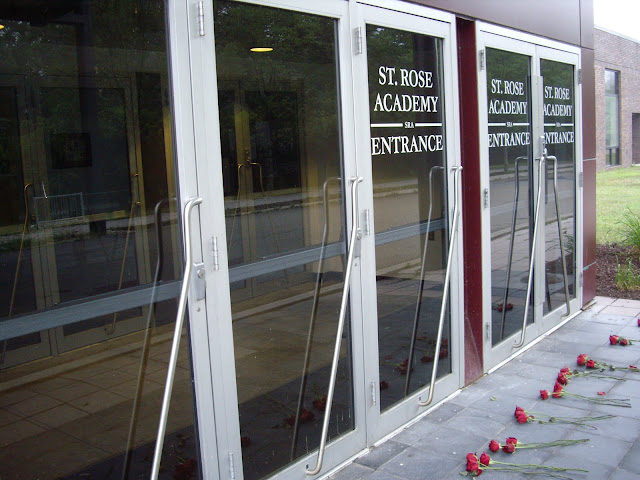 Every experience I've had with St. Rose Academy in Mayfield has been positive.  The faculty and administration have been open.  The students are well spoken and polite.

Newswatch 16 has chronicled the school's financial problems.  There hasn't been a mortgage payment in two years.  St. Rose Academy is $5 million in debt.  Enrollment, about 75, is half what was expected.  Times are tough.  Donations are down.

The school's building went up at a sheriff's sale yesterday morning.  The organization that made the loan has foreclosed.  The building will be sold to someone else.  One of the St. Rose Academy trustees told us he believes the school can still lease space from the new owner.  The school, in his view, will survive.

I have to level with you.  It looks like an uphill fight to keep this place going.  We all hope for the best.

The sheriff's sale itself fell on my watch.  See if you can follow this odyssey.

The sheriff's sale was held in a part of the Lackawanna County Courthouse where cameras are forbidden.  You should be allowed to see the process.  After all, the sheriff's sale is open to the public.

Next stop, the chambers of the second in command.  He wasn't in either.  That judge's secretary placed a call to the judge next in line.  Before the call could be returned, the acting president judge returned to his office.  He was reluctant to overturn the "restricted areas" edict of the president judge, but I politely pressed my point.  Sheriff's sales are open to the public.  The photographer and I are the public.  The public has a right to see what happens at a sheriff's sale.  The judge countered that cameras aren't allowed in courtrooms, and they're open to the public.  I said that a sheriff's sale doesn't involve a judge on a bench.  There are Pennsylvania laws (sadly) against cameras in court, but there is no such law concerning sheriff's sales.  More discussions followed.  Our camera was allowed in the sheriff's sale.

I'm not asking for a medal.  I was just doing my job.

And then, there is the strange case of State Representative Ken Smith. He makes $80,000 a year plus a fabulous perk package.  Yet, he hasn't paid much on a bank loan involving the family's Cedar Avenue, South Scranton restaurant.  Smith tells you to pay our bills to keep the government running, while at the same time, stiffing a local bank.  The bank had enough.  It foreclosed Tuesday morning.  Could they work out a deal?  Likely.  However, this sends a bad message about the people we elect and the behavior the exhibit once they get to Harrisburg.  One became the per diem king, asking for state money (our money), even on days the house wasn't even in session.  He got bounced by the voters after one sorry term.  It appears Mr. Smith will get another free ride to Harrisburg.  I sincerely hope he's learned from his mistakes.
AT 12:00 AM