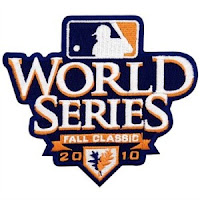 The 2010 World Series starts tonight.  The Texas Rangers are in San Francisco to play the Giants.

It's nice to see some new faces this year.  Translation:  no Yankees, and I don't have to hear the insufferable John Sterling until April.

I'm leaning toward rooting for the Rangers because this is their first World Series.  However, my attitude toward the Giants has softened now that Barry Bonds is out of the picture.

I've read where a Giants/Rangers World Series will be a television ratings disaster.  Neither of the teams has a big national following.  FOX will make money regardless, as long as the series goes more than four games.

All I really want is a competititve and close series.  I don't think there's anything in sports more exciting than the seventh game of a World Series.

By the way, if the series does go seven games, the final contest will be Thursday, November 4, and that's far too late.  Major League Baseball has to find a way to shorten the season.
AT 12:00 AM