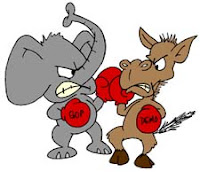 I couldn't believe what I was reading.

In one of Saturday's newspapers, a political consultant put part of the blame for his guy's loss on the fact that he had opposition in the primary.

I learned a long time ago that you miss 100 per cent of the shots you never take.  The challenger had every right to run.  Voters deserved a choice, and if he thought he could do a better job than the person currently in the post, he had the duty and responsibility to run.  Since when are party nominations handed out on a silver platter?  Primary elections are for voters to choose a party's nominee.  They shouldn't have that done for them.  Incumbency is not a free pass.  Competition and choice make everyone stronger.

While a primary challenge can be expensive, it does give a candidate time and opportunity to hone his message, to sharpen up.

The political consultant went on to list several other factors for his candidate's loss.  There was plenty of blame to go around.  By the way, that candidate was criticized, in many other circles,  for being inaccessible to the public and making unpopular votes.

I should also point out this candidate nearly lost the vote in his home town, and you can't blame that on a primary challenge.

It is not in the stars to hold our destiny, but in ourselves.  Thank you, William Shakespeare.

Then, there is the case of Mr. Keith Olbermann.  MSNBC suspended him last week for making contributions to political candidates.  It opens up an interesting can of worms.

Olbermann is an employee of NBC, and the company has a policy of frowning on political contributions by employees of the news division.  There can be exceptions, but you have to ask first.  MSNBC's Joe Scarborough donated to a candidate, after receiving permission from management.  Olbermann apparently skipped that step.

While Olbermann is on a "news" network, he hosts a clearly opinion based program.  Should he be held to the same standards as, for example, the anchor of the NBC Nightly News?  I really don't know, but I do know this whole mess could have been avoided if Olbermann went to his bosses first and made a full disclosure to the people who view his program.

It has nothing to do with his political slant, but Olbermann often comes off as mean.  Having said that, we all make mistakes, and Olbermann should keep his job-- after NBC lays down the rules.

Keith Olbermann hosts the highest rated program in MSNBC's line up.  I assume management will go on easy on him to protect those numbers.  Other employees wouldn't be as lucky.

>>>UPDATE:  NBC announced Sunday that Olbermann will have a two day suspension, and he'll return tomorrow.
AT 12:00 AM