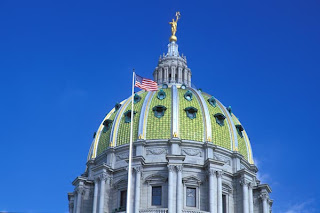 It is the first full day of the Corbett administration, and while we haven't seen the last of Ed Rendell, it is time for a quick look back on his eight years.

Others, who cover state politics on a regular basis, can do a better job of evaluating the Rendell administration, but I can offer a few observations.

I met Ed Rendell a few times, and after every meeting, I had the same impression.  This is a man who loves the business of politics.  He was hands-on, knew all the details, and had a passion for being in the arena.

Rendell won some and lost some.  He always put up a fight for his beliefs.  There were several mistakes along the way, like the legislative pay raise and the yearly budget debacle.  A Rendell budget was never passed on time.  He had a perfect batting average.  Zero.  There's a $ 4 billion budget deficit.  The anti smoking legislation is laughably weak.  Many say he is the stereotypical "tax and spend" liberal.

On the other hand, casino gambling is here, and most people seem to like that.  Money was spent to improve our cities.  There have been some government reforms.  Not nearly enough.

Rendell loves the camera and he loves to talk.  He's no longer governor, but we haven't seen the last of him.
Ed Rendell was the fifth governor I've covered as a reporter.  He ranks up there with Bob Casey on the "passion for the job" scale.  I'm just not sure Rendell's accomplishments lived up to his enthusiasm for the position.
AT 12:00 AM