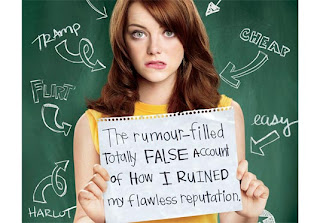 You can tell the holidays are over.  I spent my week taking care of mundane and relatively boring little tasks.

Most of them are predictable-- the supermarket, the drug store, bank, the gas station, a new watch battery at the jeweler, etc.

I've been shopping for a new pair of sneakers-- plain white.  Why is it so difficult to find a pair of plain whites at a decent price?  I'm spending way too much time in stores.

I did take a little time to watch "Easy A" on dvd.  Yes, I could have viewed it through the Comcast, excuse me, Xfinity, On Demand system for a few dollars less than what the dvd cost.  However, I got tired of playing with the system and its PIN numbers.  I gave up out of frustration, and when I saw the dvd in a store during sneaker shopping, I grabbed it.

"Easy A" is the story of a high school girl, Olive, who makes up stories about sleeping with classmates.  The stories helps get her noticed at school when she was invisible before.  It also improves the reputations of the guys who allegedly spent time with her.

As you can guess, the rumors get out of hand.  Some of it is funny.  Most of it is not.  Emma Stone is really, really good.  While she was 22 years old when the movie was filmed, the rest of her "classmates" looked to be in their 30's.  I don't know who was in charge of casting.  Other than Stone, I didn't buy them as high school aged students.  The adults, especially Olive's parents, were dowright creepy.

Borrowing the schtick of the "Screening Room" guys on WNEP:  2 out of 5 popcorn bags, and the 2 are for the Emma Stone performance.  By the way, the movie isn't as dirty as it sounds.  No nudity.  All the "relations" are implied.  Rated PG 13.

I have to jot down a few words on this week's passing of an extremely talented man, Gerry Rafferty.  "Stuck in the Middle" was a major hit for Rafferty and Stealers Wheel in the 70's.  A solo effort, "Baker Street" was huge a few years later.  Do yourself a favor.  Get yourself a good copy of "Baker Street" and a great set of headphones.  I mean a quality pair.  "Baker Street" has to be one of the best headphone songs ever.  Rafferty was 63.
AT 12:00 AM