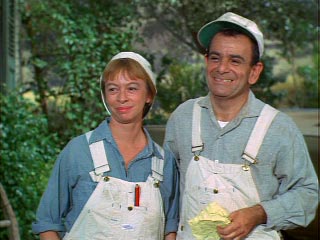 Those who know me, and who work with me know I love obscure 60's and 70's references.  It could be the lyrics from a song, a scene from a movie, or characters from a television show.

WNEP's chief engineer and I were chatting after Newswatch 16 Saturday Morning last week.  The topic was some carpentry work going on at the station.  I asked if the job was being performed by Alf and Ralph, the Monroe Brothers.

It elicited a hearty laugh from the chief engineer.  An obscure reference only works if the person you're speaking with "gets it."  He did.

In case you didn't, the Monroe Brothers were characters in "Green Acres."  Ralph, played by Mary Grace Canfield, was a woman, and there's the joke.  There were a few episodes about getting Ralph to become more feminine.  She loved County Agent Hank Kimball.  Ralph had some issues, and they were always good for a chuckle.

As I was researching today's blog, I was pleased to learn Alf and Ralph are still around.  Alf, also known as Sid Melton, is 90.  His brother/sister Ralph is 86.  Both attended Eddie Albert's funeral in 2005.

Alf and Ralph were famous for starting projects, and never completing them.  Let's hope the work at the station turns out better.  I'm sure it will, but it won't be nearly as funny.
AT 12:00 AM