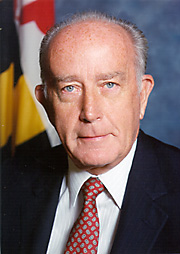 William Donald Schaefer died Monday.  He served five terms as mayor of Baltimore, and two as governor of Maryland.

Schaefer was a hands on public official.  He got things done, including the revitalization of the Inner Harbor and Oriole Park at Camden Yards.

The man was far from perfect.  He was short termpered and occasionally abusive.  Schaefer pushed people in his administration hard, urging them to get out from behind their desks to see what was going on in their city and state.

My first visit to Baltimore was in 1976.  I went on a bus trip to see the Orioles play the Milwaukee Brewers at the old Memorial Stadium.  It was Hank Aaron's last season.  He pinch hit, and walked.  I remember Baltimore as being exceptionally shabby, as many big cities were in those days.  Schaefer was in his second term at the time.  There were signs all over the place, saying "parking in Baltimore is no zoo."  It was an attempt to bring in the tourists.  Back in the 70's, it was a tough sell.  There wasn't much to see.  Schaefer changed that.

The Inner Harbor, with shopping, the Science Center, and the National Aquarium eventually made Baltimore a cool place to visit.  It was a nice mix of historical stuff, which I love, and newer attractions.  A light rail system made getting around easy.  There used to be some huge, and relatively inexpensive parking lots downtown.  Many of those lots were eaten up by redevelopment.  I was good for a couple Baltimore trips a year.

My visits to Baltimore ended quite a while ago.  That's where I happened to be on 9/11/01.  I went back the next year.  There were too many bad memories, and I felt the area was sliding a bit.  Many of the Inner Harbor shops were closed.  The area had become run down.  I didn't feel comfortable.  The quiet suburban hotel I liked so much became surrounded by strip malls and mini marts.  It was time to move on.

Having said all that, you cannot ignore all the good things Schaefer did for his city and state.