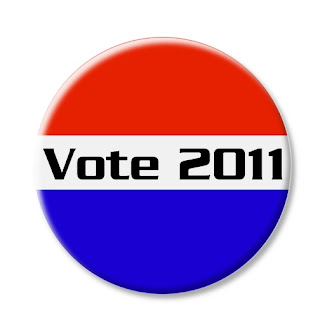 Yes, I do realize there are a lot of you who don't care tomorrow is election day.

Some observations:  There are a few races where negative campaigning has once again reared its ugly head, but those races appear to be few and far between.  Primaries are generally cleaner than the big vote in November, and this year is no exception.

The Ciavarella, Conahan, and Toole cases have given Luzerne County judicial candidates a talking point.  Several of the many on the ballot are trying to out "honest" each other.

Staying with the Luzerne County judicial race, I always chuckle at the ads shot inside courtrooms, where news cameras aren't allowed.  We can't even go on that floor of the county courthouse, your building.  Ads are okay.  Letting news cameras show you what really goes on is forbidden.

I've noticed this has been a big primary for television ads.  As someone who works in TV, thank you.  It shows there's a lot of money out there.  Politics is big business.

Direct mail seems to be especially big this year.  One of my Marywood advertising professors, the great Bill Donovan, is smiling in heaven right now.  He loved direct mail.

This has to be the biggest year in contested magisterial races in quite a while.

The ballots in some counties are lengthy this year.  It could be the best test, so far, of new voting systems.

Please, be an informed voter tomorrow.
AT 12:00 AM