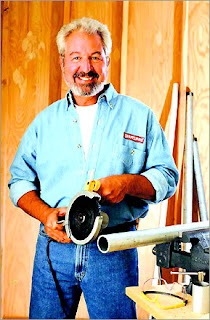 A while back, I wrote how game show host Allen Ludden was one of my inspirations as a broadcaster.


Today, another-- and one you might view as rather strange-- Bob Vila.


He started doing PBS's This Old House when I was in high school.  Even though I can't drive a nail straight to save my life, and power tools frighten me, I always watched.  Bob Vila made wood working and home improvement simple and entertaining.


I watched some old Bob Vila shows on the internet over the weekend.  He's the best at the genre that ever was.  Vila's enthusiasm sets him apart.  Every season, there was at least one show where Vila installed dry wall, and no matter how many times he did it, Bob Vila had the joy of the first.


Bob Vila is no longer a regular on television.  His TV series went out of production a few years ago.  You do see him from time to time selling Amish heaters on infomercials, and that's just sad.   The man knows how to communicate.﻿
AT 12:00 AM