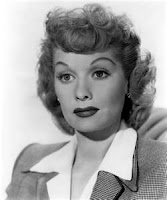 There are very few entertainers who are instantly known just by their first name.  One of them, Lucille Ball, was born 100 years ago, this past Saturday, in Jamestown, NY.

I was too young to fully appreciate Lucy's early days, but I did grow up on her second series, "The Lucy Show."  The formula was simple-- silly and funny, with plenty of guest stars.  Chemistry with co-stars Gale Gordon and Vivian Vance played a huge role.  And, then there were the special appearances.  I'll always remember the episode where Lucy assured Jack Benny his money was secure at her bank, with a tour of a high security vault.  The John Wayne show was another highlight.

Prime time wasn't enough.  CBS used to show reruns in the morning, before it got back in the game show business in 1972.

There were tons of celebrations in Jamestown over the weekend, as it should have been.  I visited Jamestown once, on my way back from Erie and Buffalo.  Unfortunately, it was early in the morning.  The Lucy Museum was closed.  I had to settle for a Burger King breakfast.

The word "legend" is over used.  It fits here.  Lucy was a legend.

Plus, former New York governor Hugh Carey dies yesterday at the age of 92.  Carey was credited as the guy who put together the deal to lead New York City out of its 1975 financial crisis.

Carey got people in Albany, New York, and Washington to work together to fix the problem.

Scranton could use a Hugh Carey today.
AT 12:00 AM