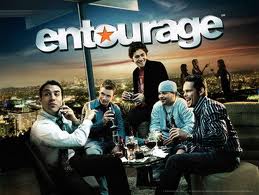 It's time for a temporary break from serious issues.

Things moved a little too fast, and were a little too cute and sweet for my tastes.  The series always had a bit of an edge.  Unfortunately, it disappeared for the finale.

I won't go in to specifics, in case you haven't seen it.  I will say that I never saw what Eric saw in Sloan and vice versa.  Vince fell for the writer in record speed, and she gave in-- totally out of character for her-- and him.

Ari's actions did surprise me a bit.  I didn't buy in to it.

I'm disappointed some characters from the past didn't make return appearances, but I do realize it would have been a lot to cram in to a half hour..

Overall, it wrapped up enough plot points for a series ender, but still left a few open for that alleged "Entourage" movie we've been hearing about.

When the history of television is written, and the list of great series is compiled, "Entourage" will not be there.  However, for eight seasons, it was pretty darn entertaining.
AT 12:00 AM