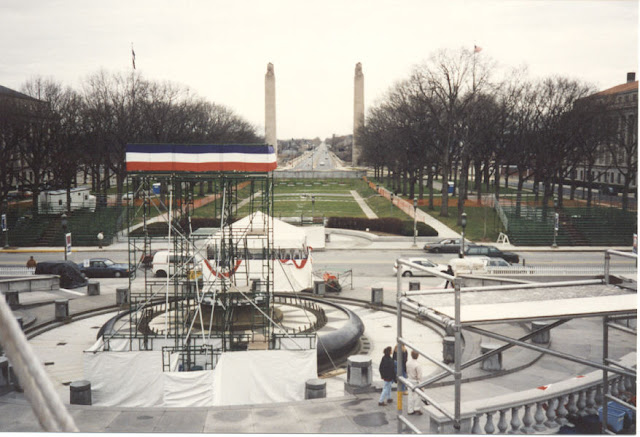 I haven't been taking many pictures recently.  It's been too cold, so today, the start of an occasional feature:  Classic Bad Photography.

I was going through a stack of old photographs on a recent afternoon, and I thought I'd share this one with you.  It's appropriate for this time of year.

It was taken on the morning of January 17, 1995-- the day Tom Ridge was inaugurated as governor.

I was working down the street back then.  My job was easy-- do live shots for the morning broadcast, and taped pieces for later in the day.  Our anchor would cover the evening festivities, including the inaugural ball at Founder's Hall in Hershey.

I had to work swiftly-- get my pieces written and in the hands of the video editor in the satellite truck fast, because the truck was being moved from Harrisburg to Hershey right after the inauguration was over.  It wasn't a problem, and I thought the stuff looked pretty good.  I wish I had saved it.  I was relaxing in the hotel by 2 PM.

The inauguration was different in a lot of ways.  Here are two.  Tom Ridge was the first governor from Erie, and he was the first to be sworn in on the east side of the capitol building.  When I took this shot, the capitol was behind me, and I'm looking out toward Soldiers' Grove the Walnut Street Bridge.

After Ridge took the oath, it was the first inaugural parade in twenty years, and it made for an unforgettable day.