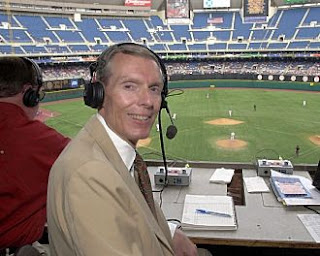 It got lost in the shuffle during a busy news week, and that's unfortunate.

When the history of sports announcing is written, I don't think you'll see Musser on the list of the all time greatest, but he he was darned solid, and always an enjoyable listen-- especially on radio.

Of course, anyone who was in the Phillies booth was overshadowed by Harry Kalas, and that's understandable.  Harry was Harry.  It should not be forgotten that Musser was a fine broadcaster in his own right.  He was one of the voices of summer.  Musser didn't have any schtick, nothing that set him apart from the pack.  He was simply a solid announcer who remembered the game was the star.

By the way, we share a birthday, so maybe there is something to astrology.