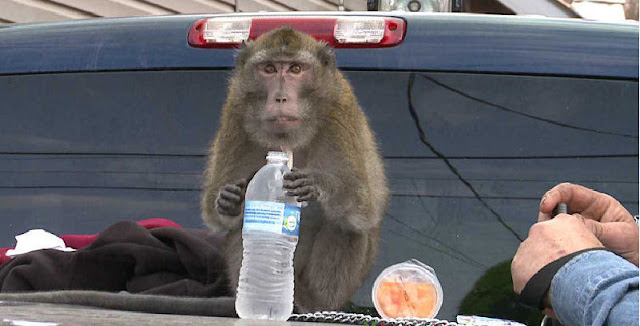 People are asking me about it all the time, so I might as well put it in to writing here.

I was working on a story on a big water line replacement project in Wilkes-Barre when I was sent to check reports of a monkey on the loose in Ashley.  Really?  I've been in the biz more than thirty years.  This was my first monkey hunt.

I met up with a photographer, who was already in Ashley.  He informed that the monkey had been captured, and was inside a home with the owner.  I stood watch outside, as members of the Pennsylvania Game Commission waited to take the critter away.

I expected to see a little spider monkey, the kind organ grinders have.  I was mildly surprised when the owner walked out with a rather large monkey sitting on his shoulder.  He looked harmless enough, until the monkey opened his mouth, exposing a frighteningly large set of teeth.

I've read enough monkey stories over the years to know they can be vicious little beasts.  I had to get close enough to get the story, but far away enough for some degree of safety.  Game Commission officers were armed.  The monkey, Tyler, was on a leash and a chain.  It seemed safe enough, but I was still concerned.  You had to see those teeth.

I should back up a bit.  Earlier in the morning, while Tyler was still on the run, police put out an advisory about a potentially dangerous monkey on the loose.  Clearly, people were worried here.  Tyler might have been a pet, but he is still a wild animal.

Tyler got loose when the owner's son decided to take him, leash-less, on a pre dawn ATV excursion.  Big mistake.  Only in Northeastern Pennsylvania can someone get caught taking a monkey on a moonlight ATV ride.

The monkey was spotted on a porch a few blocks away.  The owner came to claim him, and what could have been a dangerous situation was diffused.  Keeping a monkey as a pet is illegal, and the Game Commission reminded the owner of that.  The animal was surrendered to the state, and the owner faces a fine.

Tyler was taken to a facility for wild animals in Snyder County, where he will hopefully have a happy, safe and long life.

I talked with Tyler's owner-- who said the monkey was great pet.  He was upset over that happened.  He had Tyler for 15 years.  Neighbors didn't object to a wild animal in the neighborhood.

Here's what I really want to know.  It's widely known that you can't own wild animals.  Tyler the monkey was one of the neighborhood's best known residents.  Ashley is a small town.  There are no secrets.  Tyler lived in Ashley for 15 years.  Word of a monkey in town had to make its way to the police department.  Why was nothing done?

Even if Tyler was a model citizen, and there's nothing to indicate he wasn't, I'd still be uncomfortable with a monkey on the block.
AT 12:00 AM