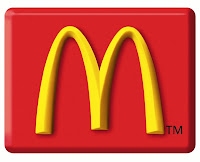 McDonalds has improved since its all time low in 2009, but it's still at the bottom of the list.  The company acknowledges it's working to make things better.

McDonalds is a lot like Walmart.  You're not thrilled about going there, but you do anyway.

I don't travel to the golden arches as often as I once did, but I still stop by once in a while.  The big plus is most restaurants are open 24 hours.  The food is okay, although overly salted and not a good value for the money.

The Big Mac and Quarter Pounder are fine sandwiches.  I think Burger King has better hamburgers, and Wendy's has better chicken.

My main beef with McDonalds, pardon the fun, is the speed of the experience.  All fast food restaurants have expended their menus, and that slows down service.  McDonalds, at least with my experiences, is the slowest of the bunch.

Papa John's (do we still have any around here) and Subway ranked the best in the survey.  Subway service crawls during peak hours, but at least you get to see your food made, and customization here is exceptionally easy.