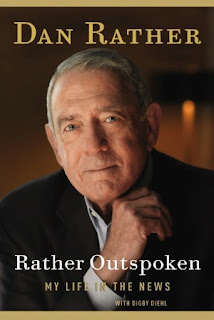 I just finished reading Dan Rather's new book, and before I launch into the meat of today's blog, I should back up a moment.

I grew up in a CBS household.  It was always Walter Cronkite at 6:30 PM, followed by John Perry at 7.  I'm sure a lot of that was because WDAU's signal came in the best back in the pre cable days.  Plus, CBS was the gold standard in network TV news.  The evening news was number one in the ratings.  No one did the space program and election nights better.  It wasn't just Cronkite.  CBS had an awesome stable of correspondents.

I always loved Dan Rather.  He covered Vietnam and the Nixon administration fearlessly.  I stayed with CBS when Rather took over the anchor chair from Walter Cronkite in 1981.

To say I was severely disappointed when Rather and CBS botched the George W. Bush National Guard story in 2004 was an understatement.  To bring you up to speed, Rather and CBS alleged, in a "60 Minutes Wednesday" report that George W. Bush was AWOL from the Texas Air National Guard in the late 60's and early 70's.  CBS had a lot of evidence to back it up, but not enough.  Rather apologized and was pushed out of the anchor chair.  Producers were fired.  Heads rolled.  An investigation followed.  While the investigation in and of itself was flawed, it showed CBS rushed the story on the air without making sure its sources were 100 per cent accurate.

In the book, Rather throws everyone under the bus, especially the brass at CBS and the people who conducted the investigation.  By the way, I should remind you that former Pennsylvania governor and U.S. Attorney General Dick Thornburgh headed the investigation, a man with close ties to the Bush family.  Yes, Rather himself takes some of the blame.

Dan Rather refuses to back off his contention that George Bush the younger received preferential treatment.  That might be true.  I wouldn't be surprised.  He is the son of a rich and powerful man.  Unfortunately, Rather was never able to conclusively nail it down.  He says the Bush administration never denied it.  Yes, Dan, they never had to deny it because you never proved it!

You know how the media thing works.  If there's blood in the water, the feeding frenzy begins.  It's what doomed Nixon, and it's what nearly toppled Bill Clinton after he, literally, got caught with his pants down.  If there was substance here, someone would have dug up something more.  It never happened.

Rather claims Republicans have been out to get him for years, and they finally did it.  All that does is reinforce the public perception that the media has a liberal bias.

Rather sued CBS, claiming it reneged on an agreement to make him a "60 Minutes" correspondent after he left the "CBS Evening News."  The suit was tossed because a panel of judges ruled CBS paid Rather the money he was owed, and therefore the contract was fulfilled, whether or not he appeared on air.

I bought the book, hoping reading Rather's side of the story would result in a renewed admiration.  It didn't happen.  In fact, the opposite is true.  It appears Rather had it in for Republicans in general, and the Bush family in particular, for a very long time.

The book isn't all Bush, all the time.  Chapters on growing up in Texas, his early days at CBS, civil rights, Vietnam, Watergate, 9/11, and Afghanistan were all supremely interesting and enjoyable.  If you liked Rather's other books, and I did, you should like this one.

I still admire most of what Dan Rather's accomplished.  The chapter about being forced out of an organization, CBS, he loved, was touching and painful.  Unfortunately, I can't get past that one horrible chapter in Rather's great career.