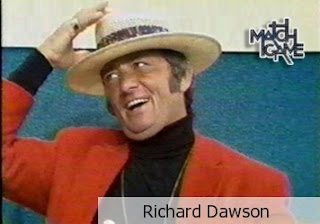 It is among the highest compliments you can pay an entertainer:   "He was funny."

There were guest shots on several sitcoms in the 60's, including Dick Van Dyke, leading to the role as Cpl. Peter Newkirk on Hogan's heroes.

After that, Laugh In, and that seat in the center of the bottom row on Match Game.  I read where Dawson wanted to learn to be a game show host, and he thought the best way to do that was to be a regular somewhere.  He struck gold on Match Game.  Dawson was the one you picked if you really wanted  to win the big money.  The man had the gift of common sense.  He could get a laugh in the small amount of time you get when you're part of a large, by television standards, ensemble.

Family Feud hit the air in 1976, and let's face it.  It's not the most exciting show in the world, but Richard Dawson's personality made the show a hit.  In a piece of useless trivia, Dawson wasn't Mark Goodson's first choice.  Who was it?  Geoff Edwards.

Several people hosted Family Feud over the years.  No one did it with the charm of Richard Dawson.

I've read where Dawson was awful to work with.  He was moody and a producer's nightmare.  He's get involved in jokes and stories during the taping of Family Feud, forcing time consuming and costly editing prior to air.  TV Guide wanted to do a cover featuring all the game show hosts of the time.  Dawson refused to participate, saying he deserved a cover all by himself.

Back in the day, Johnny Carson used guest hosts during he frequent absences from the Tonight show.  Richard Dawson did a couple days back in the 70's, and I thought he was fantastic-- glib, funny, articulate, a good listener and a good interviewer.  Dawson would have made a perfect Tonight show host.  As it turned out, Carson hung around, thankfully, for quite a while.  Unthankfully, along came Joan Rivers and Jay Leno.  You know how that story ends.