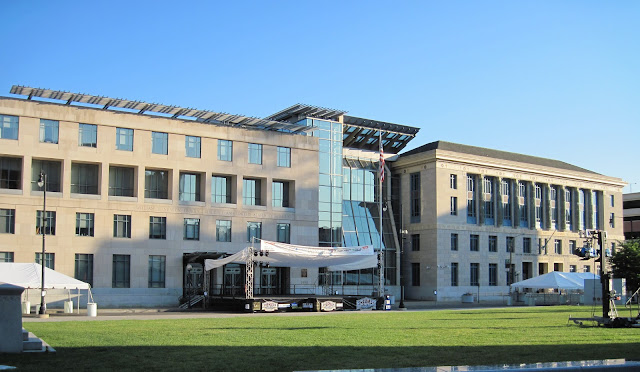 I have no idea how some people in government, public relations, and political campaigns get their jobs.  I will admit that I'm coming at this in a different way than most people.

A big festival and fireworks show was held in downtown Scranton Tuesday.  Vice President Joe Biden decided to use the opportunity to look for votes in his hometown.  My job was to be there in the morning and set the table.

The photo you see above was taken early Tuesday.  It shows the stage set up in front of the federal courthouse on North Washington Avenue.

Newswatch 16 This Morning has thousands of viewers and is one of the top rated morning news broadcasts in the country.  Do you think the organizers had someone there in the morning to get the message out about closed streets and available activities?  No. The city?  No.  The county?  No.  Someone from the Obama/Biden campaign eventually showed up.  I asked her to find someone I can speak with.  She sent out an e-mail on her iPhone.  Nothing.  Even the sponsoring radio stations didn't show up until after noon, blowing an opportunity to broadcast live in the morning, do a meet and greet, get the word out, and promote the stations and the event.

In fairness, a county employee was there early in the morning, and he answered all my questions, off camera,  about streets closing and the sequence of events.

I am most dismayed by the performance of the campaign.  It was sloppy, at least in the morning.  When you're in the public relations and advertising business, you have to anticipate as well as react.  In fact, the former is often more important than the latter.  Did it even occur to these people that TV stations would be live on the scene for their morning broadcasts?

This goes far beyond a chance to get on television.  ABC News started planning its expansion of morning news on Ronald Reagan's inauguration day in 1981.  ABC executives were on their way to the U.S. Capitol and New York offices to work on inauguration coverage when they noticed all the people out and about in the pre dawn hours.  I have news for you.  A lot more people are up a lot earlier these days.

The city and county should have been on the square to answer questions from the taxpayers, and there were many.  Radio stations should have drummed up the excitement, and the Obama/Biden people need votes.

I hope the rest of the day went better than the morning.
AT 12:00 AM