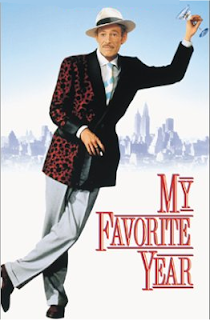 Last week, 79 year old Peter O'Toole announced he was retiring from show business, and it made me sad.

OToole starred in my favorite movie, "My Favorite Year."

"My Favorite Year" came out in 1982.  It was set at a 50's TV variety show.  Peter O'Toole plays Alan Swan, a drunk movie star, who is scheduled to be that week's guest star on the TV variety show.  Mark Linn Baker is the young writer assigned to keep O'Toole on the straight and narrow for the week.

"My Favorite Year" is about live tv, fear, hero worship, human frailties, unrequited love, the maturation process, living, loving, and learning.  On top of that, it's just plain funny.  Peter O'Toole lights up every scene in which he appears.

Here's something that makes a movie a favorite and it has nothing to do with critics' reviews.  I saw "My Favorite Year" at the Ritz in downtown Scranton, a horrible little theater that was carved out of the balcony of the old Comerford on Wyoming Avenue.  The seats were small and leg room was non existent.  However, I saw it with some good friends as my college years were coming to an end.  It wasn't just the movie.  It was the people.

The Motion Picture Academy offered Peter O'Toole an honorary Oscar a few years ago.  He declined, saying he still wanted to "win" one.  O'Toole was nominated eight times.  This should be the year when Peter O'Toole gets that Oscar.  It might be honorary, but he's earned it.
AT 12:00 AM