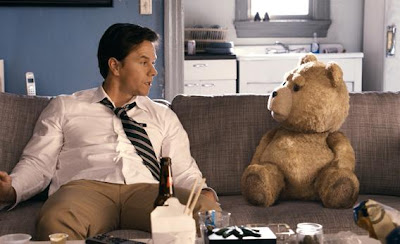 You can't spell "tedious" without Ted.

As you might have guessed by now, I saw the movie "Ted" and I thought it was awful.

To get you up to speed, "Ted" has a great premise-- a little boy wishes his teddy bear can talk.  It comes to life, and they grow up together.  Well, they really don't grow up.  As long as Ted is in his life, John Bennett, played by Mark Wahlberg, will always be a little boy.  The bear causes problems in John's relationship with Lori, played by Mila Kunis.  By the way, Kunis is more beautiful than ever, and she can act.

This is Seth MacFarlane's first live action film.  He makes the mistake of substituting crude for clever.  "Alf" was funnier.


Ted drinks, snorts cocaine, chases women, swears, and fornicates.  It gets old after about ten minutes.  Like MacFarlane's "Family Guy" TV cartoon, the jokes often come out of nowhere.  They make no sense, and they fall flat.  The movie has a disjointed feel.

Parts of this movie are just plain creepy, and I couldn't wait to get out of the theater.   Based on the premise alone, "Ted" should have been a scream.

As disturbing as the movie, in and of itself, it was scary to see the number of adults who brought children to the cineplex.  This isn't a movie for kids!  Parents in the theater should have been arrested on the spot.  Theaters need to get past the quest for box office dollars, and they have to tell parents what movies are inappropriate for the kids.  Apparently, the parents aren't interested in doing the job themselves.