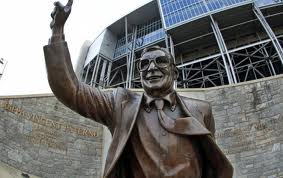 The Freeh Report has been out for week, and there's been time for the dust to settle-- a little.

To get you up to speed, the Freeh Report implicated Penn State football coach Joe Paterno in the cover up of Jerry Sandusky's sex crimes.

The Paterno family disputes the report.  Paterno's blind followers refuse to accept that their god might be flawed.  The Paterno disciples have an uphill battle.  Freeh laid it all out, including the smoking gun of e-mails and other communication between Paterno, former PSU president Graham Spanier, athletic director Tim Curley, and VP Gary Schultz.

So, that takes us to the Paterno statue outside Beaver Stadium, and the great debate over keeping it, or removing it.  The statue in and of itself is offensive.  The lettering on the wall behind it is even worse:  Joseph Vincent Paterno, educator, coach, humanitarian.  Humanitarian?  Are you kidding me?

I'm proposing a middle ground.  Remove the statue from the stadium, and put it in a park on campus.  You have to look at the body of work, and Joe Paterno did a lot of good things during his 60+ years at PSU.

Then, there's the NCAA.  PSU still faces sanctions from the governing body of college sports.  The NCAA has to do something, and something harsh.  The scandal went to the very top of the football program and the university itself.  Paterno amassed unprecedented power, and those in charge were thrilled to let it happen.   Football was king, and Paterno was the emperor.  The board of trustees was asleep at the switch.  Yes, some innocent people will be hurt by NCAA sanctions, but NCAA has to send the message that this behavior will not be tolerated.  Not now.  Not ever.
AT 12:00 AM