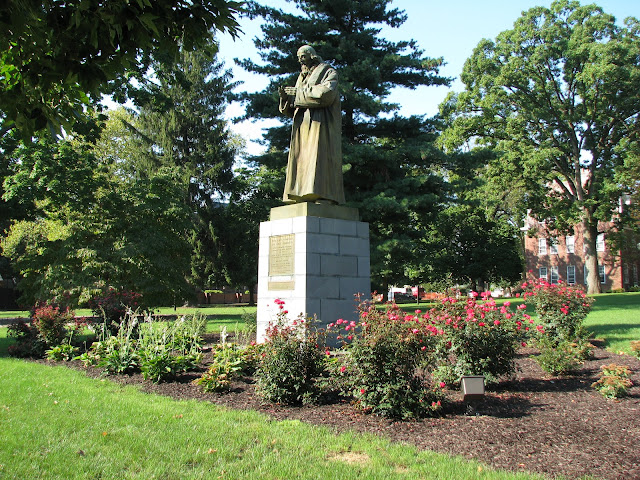 It is one of the most famous parts of the Moravian College campus in Bethlehem-- the statue of John Amos Comenius, considered to be the father of modern education.

I took this photo on a recent early fall morning, and I will have more to say about Moravian tomorrow.

Below is the story of the statue from the Moravian College web site.

The great bronze statue of John Amos Comenius (1592-1670) on Moravian's campus depicts him as a fierce old man. It may reflect Comenius's reaction to being driven from one home after another by religious wars and persecution, watching his first wife and their two children die under refugee conditions, and being continually misled by false hopes of returning to his homeland. But it may be an expression of his enduring rage at the educational conditions of his time, a rage he never directed at students, but always at the difficulties they faced in learning.
Throughout his life he tried to improve the ways students were taught. His first success in this area was a beginning Latin textbook, Janua Linguarum Reserata ("The Gate of Languages Unlocked"), published in 1631. Much later in life, he showed that he still had the needs of beginners on his mind, producing the first-ever children's picture book, Orbis Pictus ("The World Illustrated"), published in 1658. Both these books became best-sellers, translated into every major European language and used by beginning learners for over a hundred years.
Comenius's most important work, however, was written between 1628 and 1632, first in Czech and then in Latin: the Didactica Magna, usually called in English The Great Didactic. Perhaps a more meaningful translation would be "The Whole Art of Teaching." It explored how people learn and how they should be taught from infancy through the university and beyond. Published in 1649, it was a radical work for its time. In an age when people believed that human beings were born naturally evil and that goodness and knowledge had to be beaten into them, Comenius believed that they were born with a natural craving for knowledge and goodness, and that schools beat it out of them.
Although he did not use the modern words (nor did the Victorian translator who made his work available in English), Comenius addressed such topics as
It is thanks to him that educators today think these things are important.
AT 12:00 AM