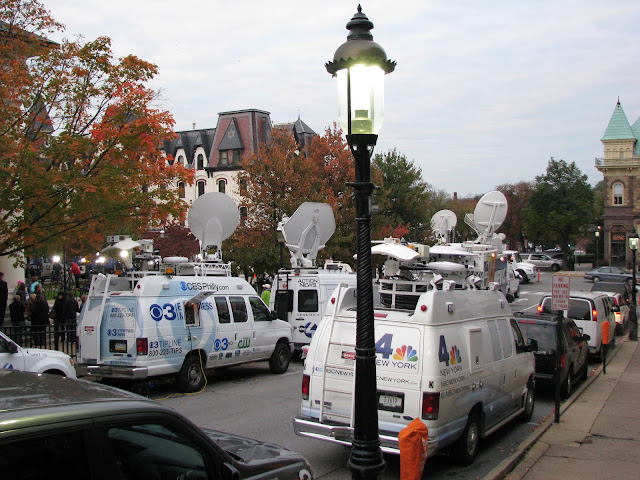 I've always referred to big events, crammed with media, like the Sandusky sentencing as "old home week."  You see a lot of people you worked with and against over the years.  It's a broadcasting reunion.  My Tuesday in Bellefonte was a little different.

There were the photographers from another station, overwhelmed and overworked because they were also filing reports for other stations in the same ownership group.  Technical issues galore, and I felt sorry for them.

There was the reporter, who I've known for decades, dealing with some recent family losses.  We talked about the old days, when we were just starting out, and figuring out how everything worked.

There was one of my many, many former bosses, now on the other side.  He gave up TV for public relations.  I had a nice conversation with his intern.  She's lucky.  She has someone knowledgeable guiding her along the way, and a nice guy on top of that.

The one that surprised me was an e-mail from Virginia.  One of our former producers was watching our coverage via a satellite feed.  She's a good kid, and it made my day.

Even though it was an interesting time in Bellefonte, some might even say historic, it felt good to be back in the car, and one the way home.
AT 12:00 AM