There Used to be a Restaurant Here 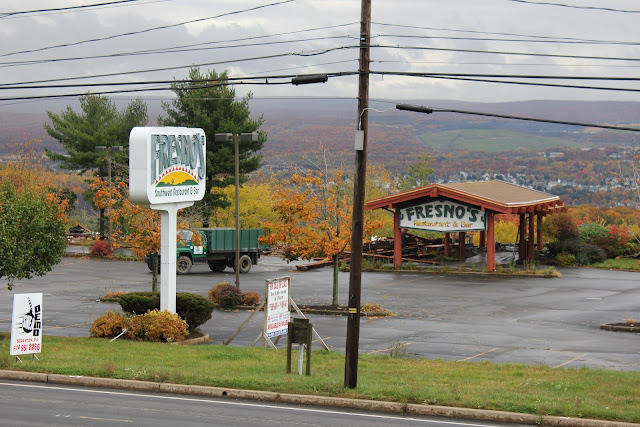 This really isn't breaking news.  Newswatch 16 reported in a few weeks ago.  Fresno's Restaurant, along Business Route 6 in Dickson City was torn down to make way for a hotel.

When I visited last week, all that was left was the covered entrance and the sign.

Let's back up a bit.  I don't remember the original name, but Fresno's began as a coal breaker themed restaurant.  Yep!  Noting builds an appetite and says "fine dining" like dinner in a coal breaker.  Needless to say, it didn't last long.  I will say the architect did a fine job.  The windows on the back side overlook the Lackawanna Valley, and it's a great view.

Fresno's came in and got off to a good start.  It was out in front of the Tex Mex wave, but then something happened.  The restaurant changed hands.  The food became bad and the service was even worse.  The chains moved in and Fresno's was doomed.  I wasn't surprised to see it close several months ago.

Still, there were some pleasant times here-- and there was that million dollar view.